Some Application of Indifference curves Technique

Economists Tchaikovsky, Higgins and other lay more emphasis on the objective of satisfaction maximization.With the help of indifference curves they showed how an entrepreneur is able to achieve a point which gives him satisfaction intimation in comparison with the profit organisation. Indifference curves are used as a relation between an entrepreneur’s sale of preference between leisure anti profits.

In the above diagram we measure on ‘Y’ axis. Profit, where ,IS Oil ‘x’ allies from left to right that is PowerPoint ‘II’ towards ‘N’ the output, lei and ICE are two indifference curves which shows entrepreneur’s scale of preference between profit anti leisure. As the entrepreneur proceed From point ‘II’ his, output, starts increasing. At ‘SIN’ level of output profit is maximum that is ‘KN’ amount, but to achieve a balance between leisure and profit, ICE (Indifference curve) is tangent .

There arc many uses of indifference curves, in welfare economics it has been used extensively. In recent years the reverse indifference curve is used in showing the relationship between risk & uncertainly and the behavior of risk-lover’s. 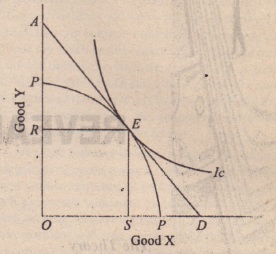 Point ‘E’ gives us the equilibrium point between consumers and producers or between demand and supply. Which is one of the starting point of Checkers Olin’s theory of general equilibrium.