Home » The Process of Economic Growth » A brave new world for productivity?

A brave new world for productivity?

The prices of computers have fallen more than a thousand- fold in the last three decades. Electronic mail and the Internet are changing the face of retailing. Computers. are the nerve system of business-running airline pricing and reservation system. scanning price and quantity data in stores, dispatching electricity. clearing checks. dunning taxpayers, and sending students their tuition bills.Some economists think that computers are like a new fourth factor. of production.

Until recently. experts were puzzled. in the words of Robert Solon. that computers can be found everywhere except in the productivity statistics:’ Even as computers invaded every aspect of economic life.productivity growth showed little response. But this changed in about 1995. whee productivity Bengal growing rapidly and regained a substantial part of the ground lost after 1973. Having grown at 3.2 percent per year from 1948 to 1973. productivity growth slowed to 1.4 percent in the 1973- 199~ period; productivity then surged ahead at 2.9 percent per year from 1995 to 1999 (see the first set of bars in Figure 27-9).

Enthusiasts spoke’ of a “new era” and a “brave’ new world of American capitalism.” Even Fed Chairman Alan Greenspan, known primarily for his understatement, joined technological enthusiasts, arguing,”A perceptible quickening in the pace at which technological innovations are applied argues for the l)hypothesis that the recent acceleration in labor productivity is not just a cyclical phenomenon or a statistical aberration, but reflects, at least in part, a more deep-seated, still developing, shift in our economic landscape.”

• Capital deepening because of investment in computers. Companies have invested heavily in computers and software over the 19905.According to the Council of Economic Advisers. this .investment has added almost 0.5 percent per year to labor productivity.

• Pro-cyclical productivity. The final factor leading to strong productivity growth in the 1995-1999 period was the robust economy and strong output growth Some economists believe that outside of computers and measurement, there has been little or no improvement in productivity growth.

Figure 27-9 shows the trends in different parts of the economy using estimates by Robert Gordon. Productivity growth in the. non farm business economy has definitely increased in the last <4 years. Ac- . cording to Gordon. however. the en’tire upturn in manufacturing productivity growth is due to computers while. .the improvement in non manufacturing is due to the business cycle and to measurement improvements many are skeptical about this controversial finding.

They point. to the fact that overall productivity  in the late 1990s was actually above the long-term trend. They also argue that much of the benefit of the information revolution is not captured in the .official.numbers. Some economists have found’ that productivity is significantly underestimated for software and communications equipment (see the discussion of price measurement in Chapter 21). Or consider the time that consumers save by shopping on the Internet; the saving of time and postage from the switch from snail-mail to e-mail. or the condolence of cellular telephones-none of these show up in .measured productivity. Others think the true gains computers iie in the future.

Stanford economic historian Paul David,who has studied past inventions like the’ electric motor, believes that it takes decades for the economy to reap the full benefits of fundamental inventions. Whether or not productivity made a permanent upward turn, it is clear that computers are shaping our economy and our lives in surprising ways.

This concludes our introduction to the principles of economic growth. The next chapter applies these principles to the struggle of poor countries to improve their living standards. In the remaining chapters’i’n this part, we open our inquiry to international trade and finance. 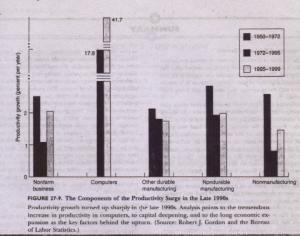