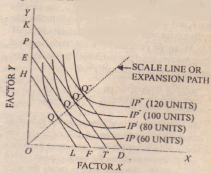 TIllS line is known as a scale line because it the way in which the producer will ;rdju~t the scale of his operations a~ he change. the scale of his output. This is also called e,’pmansion pathas along this line he will expand his output, if relative rector pI ices lain the same. GIvan the prices of factors X and Y, a producer, who is ably to vary the mountainous both these factors. will always fix his scale of output at ~Pinpoint along thc- scale line such as Q. Q’, Q”, Q ‘: in Fig. 19.7. Producing on the scale inc ,hows the Hearst way of producing each level 01 output, given relatIve factor prices. An iso-quanr or the equal product curve represents different input combination, or input ratios which can produce a specified level of output, whereas the scale line shows different levels of output, input ratio remaining the same. It must be noted that slope of the scale line will depend on the relative prices of the factors and the shape of the iso-product curves. One cannot know at which point on a scale line the producer will be in equilibrium until one knows that output he wishes to produce. How a producer will decide about the level of output to be produced by him will depend upon the conditions in the product market. (Determination of price and output by the producer under different market types will be subject-matter of discussion of our later chapters numbering 27-30).